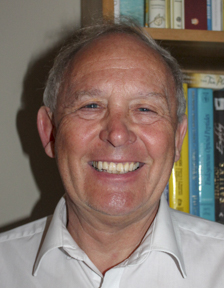 Ashley Grossman, MD
Churchill Hospital, London, United Kingdom
Ashley Grossman was awarded an Open Exhibition to St Catharine's College, Cambridge, but left to complete a degree in Psychology and Social Anthropology at the University of London, and then entered University College London where he received a First Class degree in Anatomy, and the University Gold Medal from University College Hospital Medical School. He started in the Dept. of Endocrinology at St Bartholomew's Hospital and medical school, eventually becoming Professor of Neuroendocrinology at Barts and the London School of Medicine in 1993. He moved to OCDEM, Churchill Hospital, in 2011 where he was appointed Professor of Endocrinology at the University of Oxford, and in 2012 Fellow of Green-Templeton College. Most recently, he has moved to become Consultant in neuroendocrine tumours at the Royal Free Hospital, London, in the ENETS Centre of Excellence, and is also Professor of Neuroendocrinology at Barts and the London School of Medicine. He was awarded MRCP in 1978, FRCP in 1990, MD in 1992 and a Fellow of the Academy of Medical Sciences in 1999. He has published some 500 peer-reviewed papers and nearly 400 chapters and reviews, most recently in hypothalamic and pituitary tumours and endocrine oncology. He has recently published as senior editor the Oxford Desk Reference in Endocrinology (2018), and Advanced Practice in Endocrinology Nursing (2019). He was awarded the Clinical Endocrinology Trust prize lecture in 2004, the European Society for Endocrinology Geoffrey Harris Prize in 2014, and the Iain MacIntyre prize lecture at Barts and the London in 2017: he has been President of the ENEA, the Society for Endocrinology (2012-2014), Chairman of UKINETS (2010-2012), and was President of the Pituitary Society (2015-2016).
Take Notes
Enter notes below:
Email to:
Browse Slides
CME