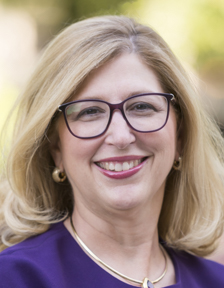 Teresa K Woodruff, PhD
Northwestern University, Chicago, IL
Teresa K. Woodruff Ph.D. is the Dean and Associate Provost for Graduate Education in The Graduate School at Northwestern University. She is also the Thomas J. Watkins Professor of Obstetrics & Gynecology, the Vice Chair for Research and the Chief of the Division of Reproductive Science in Medicine in the Department of Obstetrics and Gynecology, Feinberg School of Medicine. She is Professor of Molecular Biosciences in the Weinberg College of Arts and Sciences, and Professor of Biomedical Engineering in the McCormick School of Engineering. She is the Director of the Center for Reproductive Science (CRS), Founder and Director of the Women's Health Research Institute (WHRI), and Director of the Oncofertility Consortium. She is an internationally recognized expert in ovarian biology and, in 2006, coined the term “oncofertility” to describe the merging of two fields: oncology and fertility. She now heads the Oncofertility Consortium, an interdisciplinary team of biomedical and social scientist experts from across the country. She has been active in education not only at the professional level but also with high school students. To this end, she founded and directs the Oncofertility Saturday Academy (OSA), one of several high school outreach programs that engages girls in basic and medical sciences. She was awarded the Presidential Award for Excellence in Science Mentoring in an oval office ceremony by President Obama (2011). Widely recognized for her work, Woodruff holds 10 U.S. Patents, and in 2013 she was named to Time magazine's ‘Most Influential Persons' list. Some of her recent awards and honors include a Guggenheim Fellowship (2017), a National Academy of Inventors Fellowship (2017), the Society for Endocrinology Transatlantic Medal (2017), and a Leadership Award from the Endocrine Society (2017). She has two honorary degrees including one from the University of Birmingham, College of Medical, UK (2016). She is an elected fellow of the American Institute of Medical and Biological Engineering and the American Association for the Advancement of Science (AAAS). She is past-president of the Endocrine Society and championed the new NIH policy that mandates the use of females in fundamental research. She is civically active and is an elected member of The Economic Club of Chicago and on the school board of the Chicago-based Young Women's Leadership Charter School.
Take Notes
Enter notes below:
Email to:
Browse Slides
CME